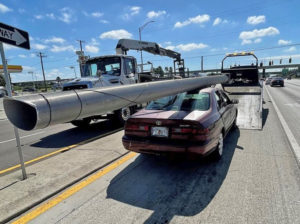 An over caffeinated busy body called the Florida highway patrol to complain that a senior citizen was picking up accident debris and cleaning the roadside. Our hero used his own vehicle to haul away the results of an accident before someone was injured hitting the abandoned material. 71-year-old Douglas Hatley of Lakeland said he was just trying to recycle the light pole that was laying on the shoulder of I-75 ramp when police stopped him. His heroic effort got the 20 foot long pole tied on top of his 1997 Toyota Camry. Deputies stopped Doug as he drove to local scrap yard to thwart his civic recycling effort. He didn’t know it was illegal to remove the pole, even if it was broken or had fallen. Hatley was arrested and taken to the Hillsborough County Jail. He’s charged with grand theft.

What color do you use when you’re recycling a chart?
Chart-reuse

Recycling in the UK is getting very serious…
Even our illegal aliens are being shipped in reusable containers.

Did you hear about the new brand of glasses coming out this year that are made entirely from recycled ketchup bottles?
Heinz-Sight 2020

I’m trying to start a chewing gum recycling company…
I just need a little help getting it off the ground.

What do you call a tire made out of 365 recycled condoms?
A Goodyear

People rarely succeed, unless they have fun in what they are doing