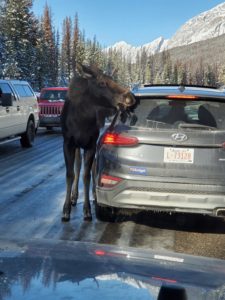 Officials in Jasper, the town outside the park, in Canada’s Alberta province, have put up signs asking motorists to avoid moose licking the salt off their cars, a treat moose find hard to resist,. “They’re obsessed with salt, it’s one of the things they need for the minerals in their body. They usually get it from salt lakes in the park, but now they realized they can also get road salt that splashes onto cars.” People often park on the side of the road in hopes of catching a glimpse of the moose, letting the animals near your car is actually a serious danger. By allowing moose to lick the salt off your car, they will become habituated with being around cars. That poses a risk to both the animals and the drivers who can accidentally crash into them. So, if a moose approaches your salty car, moist tongue out and flapping, get away. Honk your horn, scare the moose away, but don’t drive into the moose.

Jokes from the North Woods

I told my niece that I saw a moose on the way to work this morning.
She said, “How do you know he was on his way to work?”

I hope I see some moose in Canada
My hair is a mess.

What do Saudi Arabia and Canada have in common?
It’s legal to get stoned!

The plural of Tooth is Teeth, Foot is Feet, Goose is Geese, then Moose is…
Meese?

Dreams are renewable. No matter what our age or condition, there are still untapped possibilities within us

The salt of the road