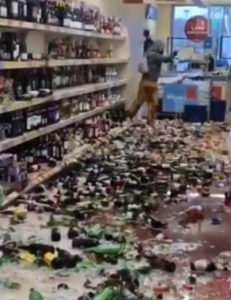 An English woman had had enough! She went to Aldi’s grocery to shop on Wednesday and was admonished that she was going the wrong way down the aisle. You know the government requires absolute obedience because the Corona Virus only travels in one direction inside stores. That was the straw that broke the camel’s back. The woman went berserk and pulled armful after armful of wine and booze off the shelves and crashed them to the floor. There was broken glass over the entire aisle and the delicious aroma of alcohol everywhere. A local news woman was in the store and videoed some of the action. Police arrived after the first two shelves were done and the frustrated woman started on the top shelf. In the midst of the battle she fell on the glass and cut her hand and went to the hospital first and then to the local jail. Aldi has not changed their aisle direction policy.

They said gloves and a mask would be enough to go to the supermarket..
They lied, everyone else had their clothes on.

Warning:
Don’t let them take your forehead temperature at the supermarket, because it erases your memory. I went for macaroni and cheese and came home with two cases of beer.

A man walks into a supermarket and goes to the produce section…
He asks the man working the counter for five pounds of potatoes. The worker says, “Mate, we use kilos nowadays.”
The man shrugs and says, “Fine, five pounds of kilos, then.”

Yesterday I went to the supermarket, with a runny nose when an old lady asked me:
“Are you sick? Do you have covid?”
“No, it’s just cocaine”
She looked at me and replied: “Thank God, young man”

Having a Bad day