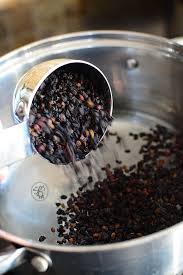 The demand for Hungarian Elderberries has soared. Not so long ago these little fruits were used mostly for food coloring and some of them went to be jelly or syrup. The Covid fear and the flu season have blown the demand and prices out of sight in Europe. While not official, there is lots of anecdotal evidence that elderberries contain a mixture of chemicals that help people cope with and maybe overcome flu symptoms. The continent is now wild to get them. Hungary produced 16,000 tons of elderberries in 2019. In Minnesota the word is out as well. Elderberries used to be an ethnic treat in the Fall, but now the promise of treating or even avoiding flu symptoms has boosted demand dramatically. The best seller is the syrup that retail cannot keep in stock. So thank those crafty Hungarians for making more than Ghoulash.

How does a Hungarian cook dinner? First, he chops an onion finely. Then, he chops some garlic as well, or perhaps use a garlic press. This is then fried in a pan with about a tablespoon of oil for about 30 seconds, after which a few tablespoons of paprika is added. Add some salt, maybe some pepper, and then he decides what dish to make.

Two cops are standing by the street side in New York City. A foreigner approaches them looking slightly panicked.

“Parlez vous Francais?” He asks them. The cops, not knowing a word of French merely shrug their shoulders at the man.

The foreigner continues with the same result with Dutch, Russian, and German. Eventually, he leaves, knowing that there’s no hope for him to communicate with the officers. “I keep telling you we should learn more languages!” says one cop to the other. “Why?” he responds. “That man knows five, and it didn’t get him anywhere.”

A brunette and a blonde visit a motel. Before they go in, brunette warns her friend “Don’t fill in your own address. Pick some European country. They won’t know the difference.”
In the form brunette states her country of origin as “Hungary” while the blonde, trying to remain inconspicuous, writes “Thirsty”.

Hungarian communism was the noble struggle by the proletariat to overcome problems that only existed under Communism.

Success is not final, failure is not fatal: It is the courage to continue that counts.

Berrieable relief for the flu