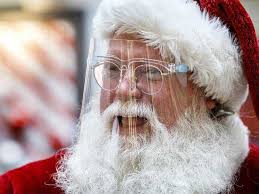 Brad Six becomes Santa Claus by pulling his black boots over his red pants in the office of a Miami outdoor supply company. It’s hot, so he goes for a lightweight bright red vest and grabs his Santa hat. But before sliding it on, the gray-bearded 61-year-old dons a plastic face shield and then takes his chair positioned behind a plexiglass sheet. “Getting paid is nice, but to get something lasting out of it requires interacting with the kids — you don’t get a lot of that this year,” said Six, who first portrayed Santa 35 years ago. One of the hardest adjustments Santas have made is wearing masks that hide their painstakingly grown beards. This is Santa Claus in the Coronavirus Age, where visits are conducted with layers of protection. That has spurred creativity in Santa’s workshops. Santas conducting in-person visits are using some combination of masks, the outdoors, barriers and distance for safety. 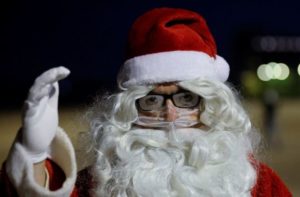 I asked my wife what she wanted for Christmas. She told me “Nothing would make her happier than a diamond necklace” So I bought her nothing. 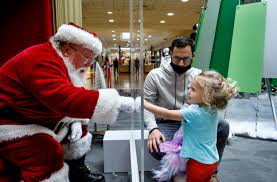 By changing nothing, nothing changes.

Santa in spite of lockdown

I know who Santa really is