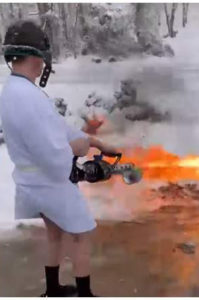 We guess it was Timothy Browning’s love of “National Lampoon’s Christmas Vacation” movie that enticed him to recreate the Cousin Eddie character wearing nothing but a white bathrobe, socks, slippers, a hat and flourishing a flamethrower. While his outfit alone in the outdoor cold would turn heads, it was Browning’s unique method of removing snow from his driveway with a flamethrower that has made him famous. In the clip below, Browning chugs a beer and throws it on the ground as he casually watches the giant flames in front of him melt away the flakes. Several follow on quippers talked about “Browning Services” and “Tim’s own snow removal company”. Many readers (who were probably more sober) on social media asked where they could get a flamethrower. Just keep the flamethrower and the alcohol separate. Now that’s what you call ”A sure FIRE way to get things done!” one user reacted.

Q: What do you call a snowman with a six pack?
A: An abdominal snowman.

Why doesn’t Santa have any millennial elves?
Because there are already enough snowflakes at the North Pole.

An Act of Malicious Compliance
Teacher: Write a short story. You have a strict 140-character limit.
Student: Once upon a time, Snow White lived with 139 Dwarves. The end.

We will either find a way, or make one – Hannibal

A hot time in Ashland Kentucky