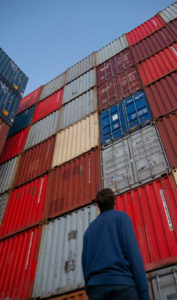 You think you had a bad day…the cargo ship “ONE Apus” lost 1,816 shipping containers somewhere in the Pacific while en route to California from Japan. Of those, 64 contain “dangerous goods” like fireworks, liquid ethanol, and batteries. A marine claim consultancy group expects the shipping company’s losses to reach $200 million, including the shipping containers that collapsed but remained on the ship. Gale force winds and swells of 50 feet caused the accident, while the ship was about 1500 miles north of Hawaii. In 2019, 6,000 cargo ships carried 226,000,000 containers around the globe. In an average year, around 1,300 containers fall off ships as they’re bobbing around the high seas. Remember, last year a ship load of Hyundai cars tipped over near shore and all the cars were lost.

I knew I lost something

As I get older and remember all the people I’ve lost along the way. I think to myself maybe a career as a tour guide wasn’t for me.

One time at school, I lost my thesaurus.
I couldn’t find the words to describe how upset I was.

I lost my job at the bank on my very first day. – A woman asked me to check her balance, so I pushed her and she fell over.

You cannot have a positive life and a negative mind.

Its hard to contain the freight