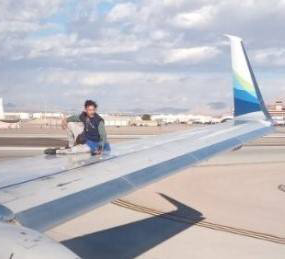 Alejandro Carlson, 41 of Las Vegas must have really loved flying because he waited for an Alaska airline’s 737 to pull away for the gate and then jumped the airport fence, ran on to the taxiway and climbed on the left wing. The pilot saw the hitchhiker and froze the plane and called police. Alejandro cavorted on the wing for the entertainment of the crew, passengers and police for 45 minutes and eventually fell off the wing and was arrested. It is assumed that Alejandro has some mental complications. The bigger question is how can a civilian so easily get over the fence and onto the tarmac to stop a plane? This guy was nuts, but what if had the intention and means to attack the plane?

Flying is a joke

Adulthood is like looking both ways before crossing the street
Then getting hit by an airplane.

My grandma was not allowed to bring her knitting needles on the airplane.
They were worried she might knit an Afghan.

A DC-10 had an exceedingly long roll out after landing with his approach speed just a little too high.
San Jose Tower: “American 751 heavy, turn right at the end, if able. If not able, take the Guadeloupe exit off of Highway 101 and make a right at the light to return to the airport.”

“What lies behind us and what lies before us are small matters compared to what lies within us.”

Hey! Wait for me

I am your wing man