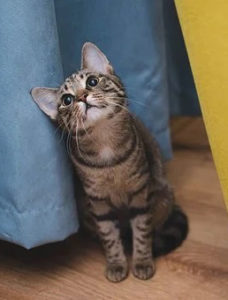 Gary Rosheisen is wheelchair bound because of his frequent seizures and deteriorating strength. Gary got a cat named Tommy about three years ago as a companion in the home. Because of his frequent seizures, Gary had been to training Tommy to press a 911 speed dial button in case of emergencies. “The phone in the living room is always on the floor, and there is a speed dial button for 911.” One day, Gary had a seizure in his bedroom and fell from his wheelchair onto the floor. He couldn’t get up and his balance was also impaired due to the strokes. Unable to move, he had no way of calling for help… but luckily, Tommy was there! Police got a 911 call with no voice. They called back and when no one answer they sent Officer Patrick Daugherty to investigate. That is when he saw Tommy the cat waiting next to the phone and found Gary on the floor in his bedroom. “Tommy is my hero,” Rosheisen said.

A burglar in Shelby County, Ohio, was caught by police after he accidentally butt-dialed 911 while breaking into a home. Making matters worse: The crook hid in a closet, but was ratted out by his phone yet again when the low battery alarm went off.

A Jacksonville, Florida, man was so upset when a sandwich shop left the special sauce off his hero sandwich that he called 911 … twice. The first time was to ask if officers could make sure his sandwich was made properly. The second time, to complain that the cops weren’t responding fast enough to the first call.

The tragedy in life doesn’t lie in not reaching your goal. The tragedy lies in having no goal to reach.

Never underestimate the power of a feline