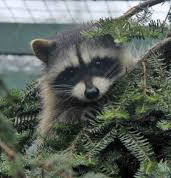 Aubrey Iacobelli was shocked awake at about 4:15 a.m. Thursday by her dog’s barking. She did not know if it was a burglar or if her cat and dog had gotten into a fight. Turning on the lights she saw there was something the dog was barking at in her Christmas tree. First, she grabbed a frying pan and tried to scare and tried to poke the cat out of the tree. It was not a cat, it was a raccoon that did not want to leave. Aubrey got a broom to poke it and the coon jumped from the tree to the floor and got into a fight with the dog. She chased it and the coon jumped on the dining room table and up to the chandelier. Aubrey kept poking it until the coon finally jumped back to the table, then the floor and ran back out the kitty door. The net effect was a horizontal Christmas tree and a messy house, but a victorious Aubrey at 5am. Let’s hope she blocked the kitty door.

As the burglar entered our darkened room, I put the red dot right between his eyes and then……let my cat do the rest.

Did you hear about the chocolate bar burglar?
The police are trying to catch him, but he always has a few Twix up his sleeve!

A man was charged with attempted burglary and breaking and entering after he was discovered by the homeowner trying to gain access to the house. The burglar had attempted to squeeze through the doggie door, but became stuck.

Q: Why did the Raccoon cross the road?
A: To prove to the possum that it could be done!