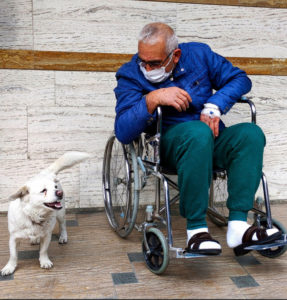 When Cemal Senturk went by ambulance to Medical Park Hospital in Turkey on January 14th. His dog, Boncuk, escaped from their apartment and followed him to the facility, where she waited outside patiently all day. The hospital called the family and told them their dog was waiting outside. They took Boncuk back home, but the next day she got out again and stood at the hospital door looking for Cemal. She did this for all 6 days he was hospitalized. She would look in the door for Cemal, but not go in. She would not bother the other folks coming and going. Boncuk was just waiting for her master. “Even though the family took Boncuk back home she managed to escape every day to wait at the hospital door.” The hospital crew set it up so that Cemal could communicate with the dog through a window during his stay. During her stakeout, the dog won the affection of hospital staff, who fed him and took care of her. “When Cemal was released he met his Boncuk at the hospital door and they went home together.

I was visiting the hospital and I walked into a surgeon’s office
“Can I help you?” He asked.
“I keep thinking that I’m a moth.” I replied.
“You probably want a Psychiatrist for that.”
“Yeah, I know.”
He looked confused. “Then why are you here?”
“The light was on.”

A politician visited a village and asked what their needs were.
”We have 2 basic needs sir,” replied the villager.
“Firstly, we have a hospital, but there’s no doctor.”
On hearing this, politician whipped out his cellphone, and after speaking for a while he reassured the village leader that the doctor would be there the next day. He then asked about the second problem.
“Secondly sir, there is no cellphone coverage anywhere in this village.”

A woman goes to the doctor for her yearly physical. The nurse starts with certain basic items. “How much do you weigh?” she asks. “115” she says. The nurse puts her on the scale. It turns out her weight is 140.

She then takes her blood pressure and tells the woman it is very high. “Of course it’s high!” she screams, “When I came in here I was tall and slender! Now I’m short and fat!”

The nurse asked the patient: “Would you please tell your visitors I cannot comment on your procedure but that the video will be available on YouTube.”

You have a visitor