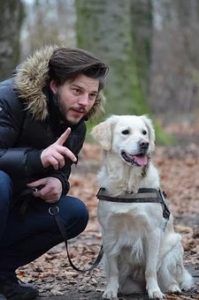 Agriculture Minister Julia Kloeckner announced this week Germany’s dog owners will soon to be ordered by law to walk their pets twice a day for one half hour. Klöeckner said the rules were based on new scientific findings that show dogs need a “sufficient measure of activity and contact with environmental stimuli”, including other animals, nature and people. The tethering of dogs on a chain or a lead for long periods also faces an all-out ban. Dogs may not be left alone at home all day, and a person will be required to take care of their dog “several times a day”. “Compulsory Walkies for Dog Owners? Rubbish!” wrote the top-selling Bild newspaper “One rule for all dogs is probably well meant but unrealistic,” said the German Dog Association. These kinds of intrusive blanket rulings from the EU are the reason many countries want to leave.

If you cannot find your dog, open the refrigerator door. He’s standing right behind you.

The W.H.O officially announced that dogs cannot get infected by the Coronavirus. Therefore, dogs can basically leave quarantine. So, i guess you could say…. W.H.O let the dogs out.

I can’t take my dog to the pond anymore because the ducks keep attacking him.
Guess that’s what I get for buying a pure bread dog

Two blondes are in a dog park. One blonde says to her friend, “Awww. Look at that poor little dog with one eye!” The second blonde covers an eye with her hand and says, “Where?”

Government gone to the dogs

Walk your dog, we are watching