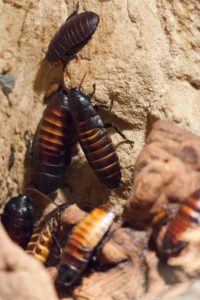 You walk into the humid, pitch-black darkness of an industrial-sized hangar. You’re sweaty and nauseated, as the air is thick with intense heat, humidity, and the stench of rotting meat. But the worst thing is that awful, ever-present noise all around you. It sounds like the pitter-patter of rain. That terrible sound is the scurrying footfalls of a billion palm-sized cockroaches. This is the everyday reality of a cockroach farm. “We have 60 small rooms. There are 20 million cockroaches in each room.  In total, there are one billion cockroaches.” Every day, the farm’s impressively elaborate system of pumps and pipes dumps 50 tons of kitchen waste collected from restaurants onto metal shelves. The roaches are usually ground up and used as a protein supplement for animal feed. Some farmers buy the roaches to kill other pests. Some people are experimenting with using the larvae food the mother roach makes as milk for human consumption.

Levity before you turn on the lights

Why are frogs so happy?
they eat whatever bugs them

What’s the opposite of a stink bug?
A de-odor-ant.

Apple software doesn’t have bugs.
It has worms.

I’m convinced my cockroaches have military training, I set off a roach bomb – they defused it. 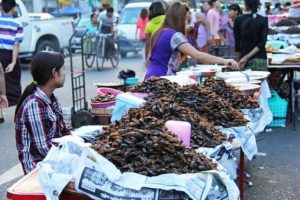 If our thoughts become things…then choose the fantastic, amazing and awesome ones.