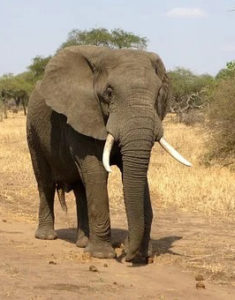 How do you calm a nervous elephant? For Kaavan, the hyper Pakstani elephant, you sing him Sinatra songs. Amir Khalil, a vet who has worked in war zones to rescue animals is an elephant whisperer. “When we arrived 10 days ago … I started to train him and to sing to him, so we have a relationship,” he said. Plans are underway to move Kaavan, to Cambodia. The 36-year-old elephant has spent most of his life in a small enclosure with meagre shelter, the last eight years alone, after his companion elephant died. Sadly, Kaavan is called “Pakistan’s loneliest elephant.” “Elephants are social animals. It was observed that Kaavan’s health and behavior changed after the death of his mate. Importing an Asian elephant to Pakistan is not an option. Hence, it is better to relocate him to a sanctuary where there are elephants of his own species.”

An American visits India and meets an old man in the town square who is renowned for his elephantine memory. He asks the old man what he had for breakfast on the same day 15 years back. “Eggs,” replies the old man, the man scoffs at this saying everyone has eggs for breakfast and walks away. Ten years later he returns to India and sees the same old man on the same spot, goes to him and asks, “How?” The old man takes one look at his face and replies, “Scrambled.”

What do you get when cross an elephant and a rhino?
‘Ell if I know?

What do you call a really unimportant elephant?
Irrelephant

I feel the capacity to care is the thing which gives life its deepest significance.

How to make an elephant relax