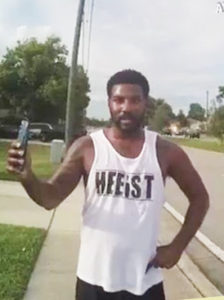 Joseph Griffin of Deltona, Florida, military veteran and registered nurse left his home for a jog. A burglar had struck in Deltona. The cops in Deltona were on a lookout for a bearded Black man wearing a white tank top, black shorts. That’s when they spotted Griffin in his jogging getup. The body cam video shows the officer calling out to Griffin and leaving his car. “Hey buddy, you’re not in any trouble or anything. There’s a burglary that happened and you kind of fit the description,” the officer is heard saying. After Griffin’s ID is verified, they release him from the cuffs, and the video shows one of the officers apologizing for the erroneous detainment. When Sheriff Mike Chitwood viewed the body camera footage, he was impressed with what he saw, from both Griffin’s and the officers’ end. “I called Mr. Griffin, too, and thanked him for how he handled the situation. When you get stopped by police this is how to act.” Since Griffin was a former military police officer, Chitwood asked Griffin to come in and give training to his staff in recognizing biases when conducting arrests. Griffin also seems enthusiastic about his chance to train police officers. “It’s a big opportunity that I think could help change the relationship between policing and the community, on both sides,” he concluded.

I searched Google images for examples of Rorschach tests…
But all I found were pictures of my dad hitting me.

I’m always amazed at the wonders of nature and how in tune they are with the Earth itself. For example, when ducks fly in V-formation, do you know why one side is often longer than the other?
It’s because that side has more ducks in it.

Give me an example of a genius:
The man who put the ‘b’ in subtle.

Not to brag, but I have sychic powers.
For example, right now you’re thinking, “It’s psychic, you idiot!”

Do as I do