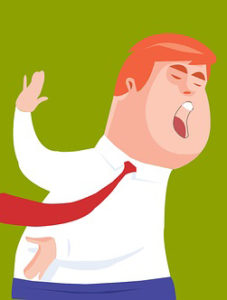 Russians have the own version of Russia’s Got Talent. A contest where the tough guys line up to slap each other until one of them is senseless or knocked down. The full-time farmer Vasiliy Khamotiskiy, a 300-pound slapper in his spare time, has attracted internet fame this year for his extraordinary ability to slap people senseless. Khamotiskiy, nicknamed “Dumpling” because he likes the food so much, won 30,000 rubles, or about $475, when he was awarded the male slapping championship at an event in Krasnoyarsk in March. His slapping winning streak was brought to an abrupt halt this month when he was slapped into a “mini coma” after he was hit so hard. Khamotiskiy was hospitalized briefly after the slap knockout but said he “liked” the shot that finished him.

America is a country which produces citizens who will cross the ocean to fight for democracy but won’t cross the street to vote.

Never get into fights with ugly people, they have nothing to lose.

Ice hockey is basically just guys wearing knife shoes fighting each other with long sticks for the last Oreo.

A calm sea does not make a skilled sailor.

Go Ahead hit me again