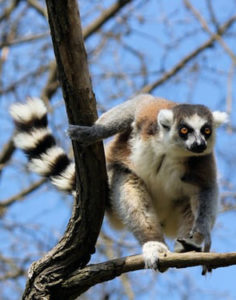 Bulletin: Last Thursday Maki, the 21-year-old ring-tailed lemur from the San Francisco Zoo was kidnapped. When the keeper went to feed one of the oldest animals in the zoo, he was gone. The zoo put a call to the community and even posted a reward for the finder. The plot thickened though, when Maki was discovered in a child playground outside a church… At the same time, Cory McGilloway, 30, was arrested in San Rafael, around 10 p.m. on charges of shoplifting and theft of a truck. His phone had photos of a lemur. McGilloway is being held in Marin County and will be transferred to San Francisco to be booked on charges of burglary, grand theft of an animal, looting and vandalism, officials said. A possible motive in the break-in at the zoo and the theft of Maki was not disclosed.

BREAKING: A dyslexic terrorist had stormed the zoo
He has taken 6 ostriches

A trip to the zoo:
Mom: “Did you have a good time at the zoo today, Junior?”
Junior: “Yes, I did. Dad liked it too. Especially when one of the animals came in at twenty-to-one!”

I went to the zoo yesterday, but the only animal there was a dog.
It was a Shih Tzu.

An Ethiopian fell into an alligator pen at San Diego zoo
He ate 5 before they could get him out.

I feel the capacity to care is the thing which gives life its deepest significance.

Lemur on the loose