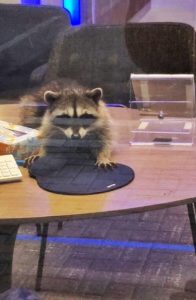 The Peninsula Bank’s security was lacks when two youngsters got inside the bank after closing hours and then cleaned out at least one compartment. An ATM customer saw the intruders as he withdrew some money from The Redwood City, California branch and called police. At first, the man thought the raccoons were merely a pair of stuffed animals, but he quickly realized that they were actually wild animals. By the time police arrived at the bank, the two juvenile raccoons had already caused a mess. Trash cans had been turned over, paper documents were all over the floor, and a computer monitor was even knocked down. The bandits themselves had made their way into the office breakroom where they found their loot: a tin of almond cookies. The rescue team managed to detain the animals after a 10-minute chase around the office. Afterward, they reportedly ushered the pair of cookie bandits out the bank’s back door.

To obtain information on my home loan the real-estate agent gave me an inquiry form to fill out and send to the bank holding the mortgage. A few days after I sent the form to them, I got the form back in the mail. The bank form had a handwritten note written in red across the top explaining that to get this information I would have to “enclose a self-addressed stamped envelope.”

A man came into our car dealership looking for a new car. We talked about the right model and colors and equipment. When we got to the loan for the car, I knew we were in trouble. The man asked, “What would be the monthly payments, including the late fee?”

My wife and my banker have something in common.
Neither of them will give me any credit.

Masked intruders caught in the act

Evidence of a break in