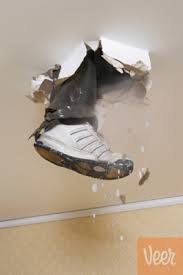 Matthew Hammar, 35, was living a life above the rest. The workers at Raley’s grocery in Fernley, Nevada found that out the other night. During the night shift restockers saw a man’s leg come through the ceiling and then quickly get pulled back up. They called the police as shoppers are not allowed to be in the rafters. Hammar had been living in area above the deli for at least a couple of days and had been stealing food from the store after the staff went home. After falling through the ceiling and being spotted, Hammar squeezed back up into the crawlspace he’d been living in. They sent a police dog up in the ceiling, but the dog fell into a shaft and got stuck. Both the dog and Hammar had to be rescued. He was arrested and charged with burglary.

Thanks to being furloughed I have finally had time to clean out my attic.
I haven’t cleaned it, but I have had time.

Burglars are getting very clever these days..
Last night, my wife woke me up..
“Darling! Darling! There’s a burglar downstairs!!”
So I go down, check every room and don’t find anyone.
Then I realized I don’t have a wife and when I went back upstairs my wallet and phone were gone.

This lockdown is not bad as it seemed. Today I had a great chat with a web designer.
Can you guys believe, the guy lived in my attic the whole time!

West London police wish to alert local residents about the activities of the infamous cross-eyed burglar.
If you see this man staring in your windows, warn the people next door.

We learn wisdom from failure much more than success.

Drop in for Supper

Burgling above it all