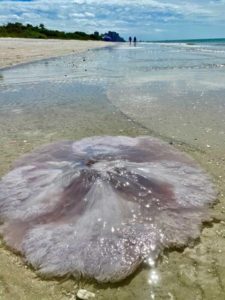 Anatoli Smirnov said he was jogging along Vanderbilt Beach near Naples, Florida when he almost stepped into the middle of a gigantic, 4-foot-wide jellyfish on the shoreline. Smirnov teased that he “almost got eaten by giant jellyfish” while out for his run. He said he goes running on the beach frequently, but had never before seen such a large jellyfish. A marine biologist said the photo depicts a jellyfish known as a “pink meanie,” but it isn’t any more dangerous than its much-smaller cousins. While its tentacles can extend to up to 70 feet, the sting will feel like mosquito bites. He said the pink meanie may have been drawn to the beach by the presence of other jellyfish species. “The prey of this jellyfish, a moon jelly fish, is quite abundant this time of year,” Douglass said. “So there are probably a few more of these pink meanies around because their prey is so abundant.”

Humor from the sunny side

Got excited that I found a bottle in the beach with a message inside…
Which read: You have no new messages.

There is a fine line between a tan and looking like you rolled around in a bag of Cheetos.

On his first day at a resort in Greece, George and his wife went down to the beach.
Later when he went back to his room to get something to drink, he found the chambermaid making their bed. He grabbed his cooler and was on his way back out when he stopped at the door and asked, “Can we drink beer on the beach?”
“Sure.” she replied. “Let me finish the rest of the rooms first.”

What do you call a Twitter editor on the beach?
A tropical depression

Your life is yours to create. Don’t let others do it for you.

Be careful where you are running

Yuck on the beach