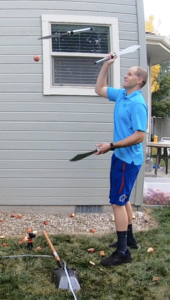 David Rush, who has broken more than 150 Guinness records to promote STEM education, enlisted the help of neighbor Jonathan Hannon to take on the record for most apples sliced in 1 minute while juggling knives (team of two). The Idaho man showed off his coordination and broke a Guinness World Record when he sliced through 40 thrown crab apples while juggling three knives. Rush, who has been juggling since 2004, said it took 1 1/2 years of “casual training” and several weeks of “serious preparation” to get to the point where he could take on the record. Hannon threw 41 crab apples in the 1 minute time period, and Rush sliced through all but one, setting the new record at 40.

You have to be pretty sharp

What’s the difference between a man with multiple stab wounds and a knife juggler?
Practice.

An inventor shows his friend the first knife ever.
His friend says, “Wow! That’s the best thing since bread.”

I made a clock. The big hand is a butcher’s knife, the small hand is a paring knife, and the clock face is a sharpening stone.
There’s never a dull moment.

“To be prepared for war is one of the most effective means of preserving peace.” – George Washington

An apple a second