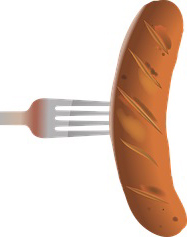 Ben Simpson is a 15-year-old boy from Swansea, Southern Wales. For most of his years, he has subsisted solely on sausages and water. Three times a day, every day, Ben has eaten nothing, but four to five skinless sausages each meal. His mother, Wendy Hughes, estimated she bought roughly $75 worth of sausages each month. Ben’s extreme pickiness began shortly after his mother began weaning him. Ben would eat nothing but finger food. “If we went to a friend’s house, he just wouldn’t eat anything. He’d say he wasn’t hungry and it was just a nightmare,” said Hughes. Then, a family friend suggested that Ben might want to try hypnotherapy. “He has responded to the hypnosis beautifully,” said Doctor Kilmurry. The definitive proof of the success of the therapy was when he received a video of Ben eating fish.

I went to see the doctor today and he said to me, “Don’t eat anything fatty.”
I said, “What – no bacon or sausages or burgers or anything?”
He said, “No fatty, just don’t eat anything.”

My Muslim friend doesn’t eat Italian sausage
It’s not a religious thing, He is salamiphobic

You are getting very sleepy, now you hate hot dogs