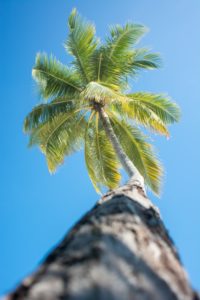 When you are trimming trees you are still subject to the laws of physics. To survive you have to be lucky or very skilled. A California arborist climbed to the top of an overgrown palm tree which was bent over by the weight of the overgrown foliage. When he decided to cut the top of the bent tree, mother nature took over and our hero went for a wild ride. The 100-foot palm tree sprang up and swayed side-to-side like a big spring. The video shows the man clinging on to the tree like a koala as it rebounds, bending back and forth, all while the employee hangs on to his chainsaw. The fellow who recorded the spectacle said he was scared, but the tree trimmer was not afraid because he has been hanging on to trees for a long time.

Jokes you can leaf through

Has anyone else’s gardening skills improved during this quarantine like mine have?
I planted myself on my couch at the beginning of March and I’ve grown significantly since.

When we decided to sell our house on our own. We nailed two “For Sale” signs to the two trees in front of our house. Before long the doorbell rang and a young man inquired, “How much do you want for the trees?”

Does it bother you when people litter? The excuse created for throwing an apple core out the window of a car is that it will plant seeds for other trees to grow. And of course, our highways are lined with hundreds of apple trees right next to the cigarette bushes.

At the supermarket, I saw a woman rush down the aisle were potted fig trees were on display. She dragged her girlfriend by the arm and exclaimed, “Look only $49.99”. Reaching out for closer inspection, she quickly withdrew her hand from a leaf. “Well, no wonder they’re so cheap”, she said, “they’re alive”.