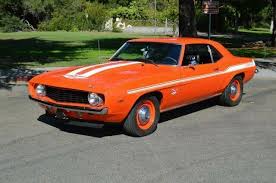 Tommy Cook reported the “Hugger Orange” Camaro stolen from his auto repair lot in Woodbridge, VA in 2003. After reporting it stolen, he kept renewing the vehicle’s “missing” status with police through the mail in the ensuing years. “I never wrote that car off. I knew there would be a day and a time when I would get that car back. I didn’t know where, but I knew it was out there somewhere.” Cook said had no leads until 17 years later, when a friend asked him to take a look at a vehicle listed for sale online by a Maryland man near La Plata. Cook said he arrived at the auto shop to look at the 1968 Camaro, but his attention was grabbed by a hoodless 1969 Camaro in the corner of the garage. Cook said he took a look at the dashboard VIN and thought it seemed suspicious, so he checked the VIN under the hood — and it matched his missing car. Cook said the car has received some upgrades since he last owned it — including an engine being installed. “Some people had put money into it,” It was better than it was when it was stolen, but it’s still an ugly green,” Cook said.

A police officer pulled over a car on a deserted highway and told the driver, “Congratulations! You’re the first person here today who was wearing a seat belt and now you’re entitled to a prize of $1000. What are you gonna do with your money?”
“Well”, replied the man, “I think I’m gonna get a driver’s license.”
“Oh, Ignore him.”, his wife said, “He always speaks nonsense when he’s drunk.”
“I KNEW IT!”, his father bellowed from the backseat, “I KNEW WE WON’T GET FAR IN A STOLEN CAR.” Then came the voice from the trunk, “Are we over the border yet?”

Guy walks into an auto parts store and says to the counterman “I’d like a set of wiper blades for my Yugo.” Counterman thinks for a minute, then replies “OK – sounds like a fair trade to me.”

The most stolen car last year was a Toyota Camry. Toyota is negotiating with the Fiat people to help them design a car no one would want to steal.

Recently, I woke up to find that two of my car’s tires had been stolen. When the police officer arrived, he asked, “When were you last driving the car?” “Last night at 11:00,” I said. “And the tires were on it then?”

You don’t have to be good to start, but you have to start to be good