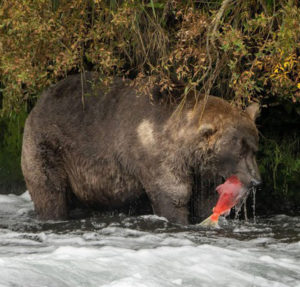 Otis, a brown bear estimated to be 24 years old, was crowned on Tuesday as the winner of Katmai’s annual Fat Bear Week. He came out on top in an online competition pitting 12 large, salmon-chomping bears against one another. Fat Bear Week is a joint project of the National Park and its nonprofit partners that has become an internet sensation. Wildlife fans submitted votes in a playoff-style competition featuring photographs and video of the bears feasting on the salmon-rich Brooks River. Otis was the inaugural Fat Bear champion, winning in 2014. He also took the 2016 and 2017 titles. The Katmai Conservancy has named a fundraising project after him; last year, the Otis Fund raised more than $230,000 for Katmai research, education and bear-protection projects. In his old age, Otis can no longer compete with the younger and stronger bears for prime fishing spots, according to park officials. Two of his canine teeth are missing, and the others are worn. But when it comes to salmon, Otis is deceptively canny. “While Otis occasionally appears to be napping or not paying attention, most of the time he’s focused on the water, and he experiences a relatively high salmon catch as a result,” the website says. The bears need their girth because they can lose a third of their weight during their winter hibernation, park officials said. 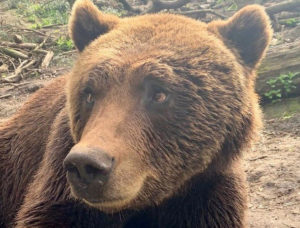 All that chomping has Bear consequences: Neo Is a European brown bear living with fellow bears Albie, Nila and Gemini at the Wild Place Project in England, Four year old Neo had a problem, a bad tooth. It was infected, it hurt and he was not eating and even went into a light form of hibernation. Veterinary dentist Martin Brice performed a root canal procedure to treat an abscess at the base of one of his canine teeth. Neo was under general anesthetic for about three hours. “Neo’s root canal surgery was essential to treat the infection that caused the abscess. “It is possible that he might require further treatment in around six months as he’s quite a young bear and his teeth may not yet be fully mature.” Vets were able to carry out of a full health check on Neo. “His other results came back all clear and he has made a quick recovery following his dental work.” Start eating, winter is coming.

I hate brushing my teeth at night because that signifies that you can’t have any more food. I’m just never ready for that kind of commitment.

Nutritionist: You should eat 1,200 calories a day.
Me: OK, and how many a night?

After explaining about latitude, longitude, degrees and minutes the teacher asked, “Suppose I asked you to meet me for lunch at 23 degrees, 4 minutes north latitude and 45 degrees, 15 minutes east longitude?”
After a confused silence, a voice volunteered, “I guess you’d be eating alone.”