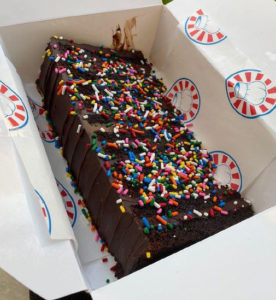 The “Get Baked” bakery (on the right) in Leeds, England, wrote a social media post that went viral announcing that it would be closing for a day because it needed to conduct staff training to “get some important stuff done,” and because everyone who worked there was exhausted. That weekend alone, they said they’d had customers from several different countries, sold loads of chocolate cakes and had been visited by a representative from the country’s Trading Standards agency because a customer had reported the shop for, uh, using illegal sprinkles. Get Baked uses sprinkles imported from the United States on its “Birthday Bruce” cakes (pictured) and on its raspberry glazed donut cookies, which are the shop’s best-selling cookies. According to the BBC, the problem is that those American made sprinkles contain E127 food coloring, which can’t only be used in the UK on cocktail and candied cherries. “The Trading Standards inspector said they’d had reports of us using illegal sprinkles and I actually laughed by mistake, then realized he was being serious,” said Get Baked owner Rich Myers. “British sprinkles are rubbish,” he said. “They run and aren’t bake-stable. The colors aren’t vibrant and they just don’t look very good.” “It is HIGHLY unlikely that we will find any legal sprinkles that we will use as a replacement. British sprinkles just aren’t the same, they’re totally crap and I hate them. I am extremely passionate about sprinkles.” 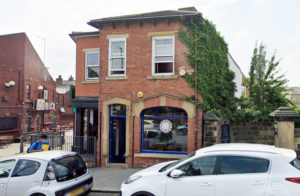 A customer in a bakery was observed carefully examining all the
rich-looking pastries displayed on trays in the glass cases.
When a clerk approached him and asked, “What would you like?”
He answered, “I’d like that chocolate-covered, cream-filled doughnut,
that jelly-filled doughnut and that cheese Danish.”
Then with a sigh he added, “But I’ll take an oat-bran muffin.”

I caught my wife adding yeast to my beloved flatbread recipe;
But I know she’s just trying to get a rise out of me

I robbed a bakery today.
It was dangerous, but I took the whisk.

To avoid criticism do nothing, say nothing, be nothing.