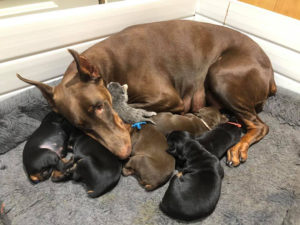 Brittany Callan, Ruby’s dog parent, breeds Dobermans with her family on its farm in rural Geneseo, N.Y. They have 14 Dobermans in total, six of those being Ruby’s new litter, which was born Aug. 18. One day in late August, Brittany was helping clean out her aunt’s gutters when she heard a strained meowing sound coming from behind the garage. “Of course, me being an animal lover, I had to go check it out.” She found a helpless newborn kitty. Ramblin’ Rose was incredibly small, newborns need milk to survive, and right next door, Ruby was still nursing her own week-old puppies who hadn’t even opened their eyes yet. Callan decided to introduce the two. After an easy introduction, Callan opened the kitten’s little mouth and placed it on Ruby’s smallest nipple. “She took right to her and didn’t seem to mind at all,” Callan says. Ruby became quite attached to her “adopted” baby. Callan says Ruby carries Ramblin’ Rose around the house in her mouth. Despite their energy difference, Ramblin’ Rose and her new puppy siblings also get along great. Callan says they snuggle up together at night, sleeping soundly as a little family. The puppies are all claimed and will go to new homes after they turn 10 weeks old. Meanwhile, Gibbs, Callan’s cousin who helped rescue Ramblin’ Rose, will take the kitten home herself after the kitten is through nursing.

Aunt Ruby and Uncle Arnie tried for years to have children of their own with no success and so they adopted a baby boy. Later that same year Ruby got pregnant and had another baby boy. One of the women of the neighborhood came to visit and asked which one of those boys is yours? Ruby replied they both are. The lady rephrased her question, ‘Which one is adopted?’ After a moment’s thought Ruby replied looking her straight in the eye, “I have forgotten.”

“I always say if you aren’t yelling at your kids, you’re not spending enough time with them.”

“My mother is such an alarmist”, complained the teenager. If I cough, she swears it is bronchitis. If I have headache, she thinks it is a tumor. One little lie and she thinks I will turn out to be a politician.

A frantic mother called the doctor saying her son had eaten an aspirin. Doc: “Is Billy crying?” “No”. “Is Billy sleeping?” “No.” “Did he throw up? “No.” “Are his color and breathing normal?” “Yes”. “But doctor I am scared after all he took an aspirin shouldn’t I do something?…’ The doctor replied, “Try and give him a headache.”

We learn wisdom from failure much more than success.