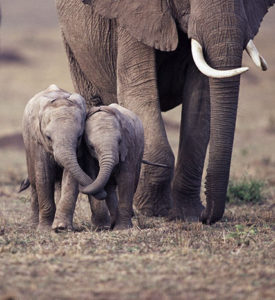 The first observed set of baby twin Asian elephants have been discovered. Their births coincide with the world’s largest Asian elephant gathering, which takes place in Minneriya, Sri Lanka. More than 300 elephants gather from July to October during the dry season to feed on grass shoots emerging from the drying lakebeds. Playful elephant calves in Sri Lanka’s Minneriya National Park are a common sight. But things were different for the two baby elephants noticed when the country’s national parks reopened in mid-June after the COVID-19 lockdown. The calves were the same size, always together and suckling milk from the same female at the same time with each calf nursing on opposite sides, Pilapitiya said, leading to the conclusion that this female was their biological mother. In addition, the time the two calves spend with each other, and their behavior toward each other also helped him conclude that they are twins. Elephants start arriving at the national park in July and typically stay through mid-October. The timing of the births of Minneriya jumbo twins offered the perfect kickoff for the 2020 gathering. The event has been internationally recognized as one of the world’s greatest wildlife spectacles, and it’s a huge tourist attraction for the country that’s estimated to bring in more than $6.5 million for the park.

What do you get if you cross a parrot with an elephant? An animal that tells you everything that it remembers!

Anything not related to elephants
is irrelephant.

What do you get when an elephant skydives?
A big hole at the landing.

A census taker in a rural area went up to a farmhouse and knocked. When a woman came to the door, he asked her how many children she had and their ages. She said, “Les’ see now, there’s the twins, Sally and Billy, they’re eighteen. And the twins, Seth & Beth, they’re sixteen. And the twins, Penny and Jenny, they’re fourteen.” “Hold on!” said the census taker, “Did you get twins every time?” The woman answered, “Heck no, there were hundreds of times we didn’t get nothin’.” .

My 10 year high school reunion was this weekend…
I ran into these twin brothers I hadn’t seen since graduation, and I thought to myself..
“Well, you two still look the same.”