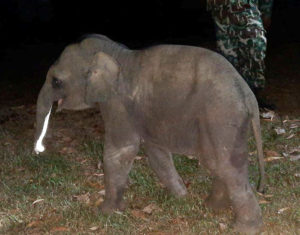 Mana Srivate, who has been an EMT for 26 years, told Reuters he came across an  accident scene late on Sunday while he was on a road trip. Traffic was stopped on the dark road in Thailand. Mana came to the front of the line and saw a motorcycle rider had hit a small elephant and both of them lay on the road needing assistance. The motorcyclist was mostly shook up.  The baby elephant had been following a pack of pachyderms and he was the last one crossing the dark road and the motorcyclist did not see the little fellow before it was too late. Mana checked the elephant for vital signs and he was not breathing. Naturally, Mana started chest compressions on the baby elephant. He began to sweat as he pushed not only from the exertion, but wondering if the herd was going to come thundering back looking for their lost infant. Mana was kind of guessing as to where the elephant’s heart would be and how hard to push to get the heart beating again without breaking any ribs or causing more injury. To the joy of the bystanders after  10 strenuous minutes the baby start breathing. Then with the help of some of the bystanders they got the baby up on its feet. The crowd applauded while the confused elephant staggered around for a few minutes and then trecked off into the bush. Mana said that the elephant was the only victim he had ever managed to revive through cardiopulmonary resuscitation.

“Cocaine” is an Irish illegal brew that etches holes in steel plate. Old Thomas Flanery after drinking a pint of it saw so many animals in his room that he put a sign on his house naming it the “Zoo”. The local constable Sgt. one day was called to reason with him as was no sooner in and then he was offered a glass of the “Mountain Dew,” as it is called. When the policeman staggered out 30 minutes later, he raised a hand for silence and in slurred speech announced to the waiting neighbors, “It’s all right, then the worst is over, he sold me half the elephants.”

Q: What do you call a guinea pig that can pick up an elephant?
A: Sir!

What do you get if you cross a parrot with an elephant?
An animal that tells you everything that it remembers!

What would you rather be stomped on by a herd of elephants or an angry woman in high heels?
… At least the elephants you could reason with.